One of the most common ways bacteria are grown in a lab is called batch culture. In batch culture, bacteria are added to a fixed amount of liquid growth media, a solution that contains nutrients for bacterial growth and allowed to grow under defined environmental conditions.

1. Lag phase: Immediately after they are added to a new media bacteria must adjust their metabolism to the new environment before they begin growing and dividing. The number of bacteria in the culture does not change during this phase.

2. Log phase: Bacteria actively grow and divide, and the number of bacteria in the culture grows exponentially.

3. Stationary phase: When an essential nutrient in the media is depleted, growth slows substantially, such that growth rate in the culture becomes equal to death rate. The number of bacteria in the culture is unchanged.

4. Death phase: When culture conditions can no longer sustain any growth, bacteria die off exponentially.

Phases 2-4 will happen in every batch culture, given enough time. However, it is possible for no lag phase to be observed if little or no adjustment of metabolism is needed for the bacteria to begin reproducing in their new environment.

The following experiments was conducted to investigate the variables that affect bacterial growth in batch culture.

A batch culture of E. coli, a common bacterial species used for lab studies, was grown in a nutrient rich media called LB. When this culture reached log phase, 0.5 ml samples of the liquid media was removed and used to inoculate each of two 1L flasks. Each of these flasks contained a different type of liquid growth media. The new cultures were then allowed to grow at 37°C.

Growth of the cultures was monitored by taking periodic measurements of the optical density, or OD600, of the growth media. Optical density is a measurement of how easily light is able to pass through the media, and it is directly related to the concentration of living bacteria in the media. The resulting measurements are graphed in Figure 1.

Eight 1L flasks of minimal growth media were inoculated with bacteria: four with E.coli, and four with P. aeruginosa. The flasks were then incubated at 37°C under one of two conditions--either with, or without oxygen--and OD600 measurements were taken every hour to monitor growth.

After OD600 measurements stopped rising, the bacteria was separated from the media and weighed. These measurements were used to calculate growth yield, or the percentage of carbon source(s) in the growth media that was converted to biological material. Growth yield can be used to determine how efficiently the bacteria are able to use energy during a given set of growth conditions. The results of these calculations are shown in Table 1. 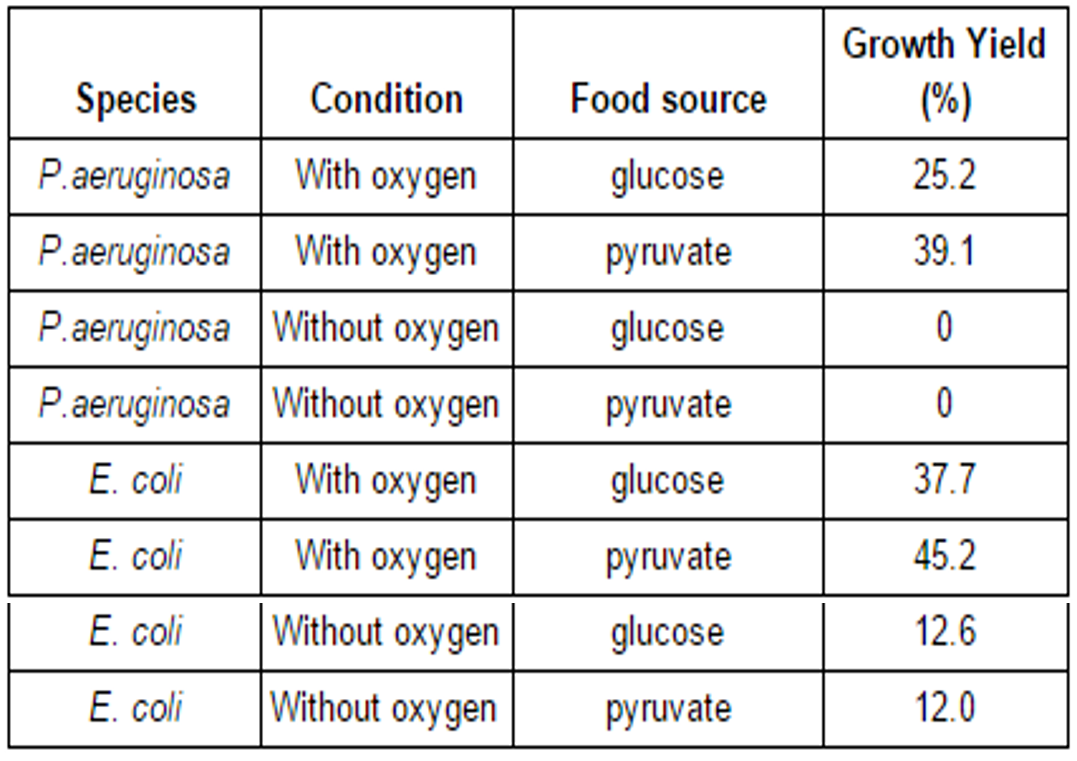 Choose the option that best answers the question.

One of the most

According to the passage, we know that bacteria cultures have longer lag phases if they need more time to adjust their metabolism to their new environment. Since the question tells us an E. coli culture needs to develop new metabolic pathways, we would expect there to be a significant lag phase. (C) is the only graph that shows a significant lag phase followed by exponential growth of the culture.

Watch the lessons below for more detailed explanations of the concepts tested in this question. And don't worry, you'll be able to return to this answer from the lesson page.